skip to main | skip to sidebar

"Violence Is Not The Way" 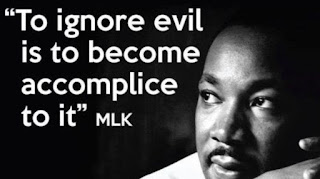 I was invited to a watch party on Facebook, and protesters in Philadelphia were attempting to pull down a statue in a public square. It was equally comical and alarming. It was comical because it was clear that they were acting out with no practical knowledge and alarming because I was afraid it would topple over, crushing dozens of them under its weight.

The scene was riveting to me. Though I had planned to head outside for a walk in the pleasant 80-degree weather that was blanketing New York City, I could not tear myself away.

Into my reverie came the comment section with caucasian people calling it a "tragedy" and "disgusting." It set my blood to boiling. I posed several questions: "Which do you find more disgusting, the pulling down of a stone statue or the killing of black and brown people with no justifiable cause?", "Is the statue more important than the constant loss of Life they are protesting," "Are you as disgusted by three to four police putting their full body weight on a man until he dies - no trial, no jury of his peers? Killed. Murdered. And for what?"

I have yet to receive an answer to these questions.

Earlier in the day, I had gone to pick up a few groceries from the store and received a call from a good friend who lives in a city further south. He wanted to know if I had been watching the footage and photos of the many protests all over the Country - Philly, Cleveland, Atlanta, New York, Boston. So many.

We chatted about the ongoing state of race relations in America and the narrative pushed by the media. We commiserated over the continued marginalization of our people. We discussed the possibilities of the whole Coronavirus pandemic being a planned event (him being a bit of a conspiracy theorist, at times). Then, we hit upon a topic that was slightly contentious between us: Why are people rioting? Is that going to make it better or worse?

Let me say that I am a proponent of non-violence, in general, and nonviolent protest specifically. However, I believe that it will take dozens of disparate approaches for any real change to occur. Some will need to fight back, and others will find their calling being nonviolent. There will be those who can circulate petitions and those who can get the ear of our representatives in office. I hope that all will use their right and responsibility to vote, but voting alone will not change people's hearts.

People wax nostalgic about Martin Luther King, Jr. and his nonviolent protests, but it was not the lone approach of Dr. King that brought about Civil Rights. It was a combination of factions, including him, and Malcolm X, and the Black Panther Party, and the Nation of Islam, and, and, and…

Lest you forget, both the nonviolent Dr. King and the more militant Malcolm X were assassinated.

I also remember reading the story of Nelson Mandela and realizing that, even though he was the leading figure touted in the struggle for equality in South Africa, there were many coalitions in that fight - some followed the nonviolent path, others were much more militaristic. They blew up houses, businesses, and power plants - if memory serves me correctly.

There is no one walk to freedom and equality.

As we continued our conversation, we came to the tentative conclusion that people need to do what they are willing to do. Those who can be nonviolent in the face of violence should do so. Those who are predisposed to fight, go to jail, be beaten and abused, should be ready to take their lumps for the cause.

Black men, women, and children are being killed by those sworn to protect US even when doing things as innocuous as playing in a playground, driving down a street, or sleeping in their own homes. Who are you to say that they should only protest peacefully in the face of genocide?

In this Facebook watch party, someone stated that "violence doesn't help anything," and I reminded them that the USA was created when people took to the streets, tarred and feathered their British overlords, and fought for Independence. Was it a smooth, safe, and nonviolent transition of power? No!

Power concedes nothing without a fight.

Every uprising has its detractors. There are those who would uphold the status quo as long as it is working for them. They will attempt to vilify those who are being unjustly jailed, beaten, and even killed before they will demand accountability from those sworn to uphold the Law.

"Life, Liberty, and the Pursuit of Happiness."

If you have not been demanding justice for Amadou Diallo, Sandra Bland, and Tamir Rice, how can you now declare that "violence is not the way."  Violence has been perpetrated on our kind from before we were brought to this Country. You birthed US in brutality during slavery. You taught US, from your history books, that violence is the way to get what we want. You continue to grind your knee into our necks and expect US to be complacent and nonviolent in the face of your cruelty.

It is going to take an economic, spiritual, and political revolution to stop the murder and subjugation of minorities in this Country. You are either with US or against US.


Posted by robertanton at 11:11 AM No comments:

Promote Your Page Too

robertanton
Robert Anton is a proud native of Cleveland, Ohio. He began his music career singing in his grandmother's church; then moved on to choirs and ensembles in high school and college.

After moving to New York City with a few hundred dollars and a dream, he quickly began performing in any venue available and landed his first big tour doing his favorite show, "Dreamgirls", with Miki Howard and other noted performers.

He has performed and toured in over 10 countries and 150 cities around the world in such diverse productions as: Smokey Joe's Cafe, Annie Get Your Gun, Black Nativity, The Student Prince, Beauty and The Beast, Hair, Aretha: Queen of Soul, Dreamgirls, and more.

Currently Robert is promoting and celebrating his own original music.

He feels so blessed to be able to Follow His Dreams.